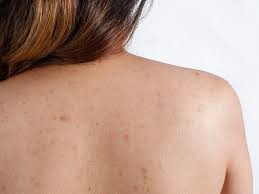 Pimples on the back too!

Pimples (acne) can occur on the back and chest too!
Dr. Rajan T.D., MD, DVD, DNB

Pimples or acne are eruptions of varying sizes which appear due to blockage of the pores which bring out the oil secreted by glands in the skin. When an excess of oil is produced and it chokes the outlet of the tube, bacteria step in and have a ‘cheese’ party! The net result is a stain or a depressed scar.

The commonest occurrence of such eruptions is on the cheeks, nose and the forehead. However those are not the only areas where the oil glands get clogged. Eruptions occur on the shoulders, arms, and between the shoulder blades of the back. In girls tiny eruptions appear between the breasts which also undergo inflammatory changes.

Many youngsters get disturbed by such eruptions between the breasts and the back. They begin to wonder if it related to sexual activity or addictions,