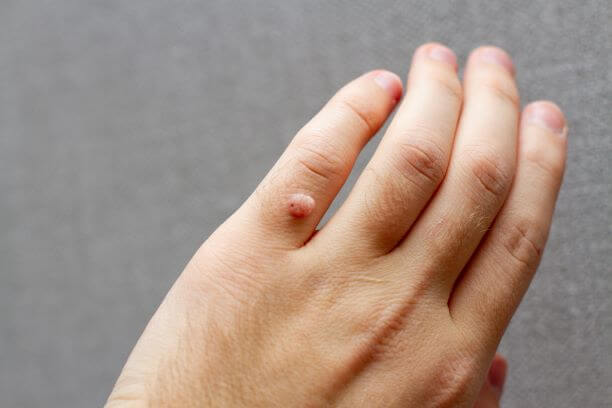 How often have you been troubled by a corn on the foot? That tiny little lump can cause immense pain while walking or playing. Only on consulting a doctor would you know that whether it is really a harmless corn but a viral infection called wart. So what is the difference? Aren’t warts ugly growths on the fingers? Dr. Rajan T.D. helps to unravel this mysterious skin infection.

Warts are dirty looking growths on the skin which multiply without causing any pain or itching. They seem harmless over most parts of the body except when it appears on pressure-bearing areas of the feet or the fingers.
These are caused by Human Papillomavirus (HPV) which enters the skin through tiny nicks and cuts. Once they gain entry into the upper layers of the skin (epidermis) it hijacks the cell to multiply more rapidly than the surrounding cells leading to a tiny bump with a rough surface.
Occurrence
Warts can occur at any age and on any part of the body. However, they are commonly seen on the fingers, hands, forearm, legs, face and neck. In housewives and canteen workers they are very common due to repeated injuries and cuts during work. Likewise they are often seen in embroidery workers, hairdressers and butchers. On the feet warts commonly occur among farmers and people who walk barefeet.
Warts are usually few millimeters to a centimeter in size. Occasionally many wars merge to form larger masses.
Types
•    The classical type, common warts (medically termed Verruca vulgaris) are cauliflower like growths that can occur on any part of the body but the commonest areas are the forearms, hands and feet. By themselves warts cause no itching or pain. However when the wart is located on the weight-bearing areas of the feet, pressure point of the hands or around the nail pain is common.
•    Being contagious, they spread not only on one’s own body by contact; they also spread rapidly to others. Children get warts on their body from parents who have unknowingly transferred it from their fingers! School-going children may get warts on the elbows and knees due to injuries from the playground.
•    On the face warts give an unclean appearance. There are different varieties of warts on the face. The commonest types are Plane warts which look flat, rough and gray. These are usually seen in clusters on the forehead, cheeks, around eyes etc.
•    In other cases, they are seen as thread-like projections called Filiform warts. When they occur on the margins of eyelids, there is a risk of irritation to the eyes. Sometimes, they appear like multiple threads arising from a common base and are called Digitate warts.
•    Unlike in women, in men warts are known to cause havoc on the face by rapidly multiplying into large numbers. By repeated cuts during shaving a man with a couple of neglected warts may find over twenty or thirty warts all over the cheeks and chin, in a few months.
•    Warts can occur around the nail and may sometimes grow beneath the nail causing distortion of the nail itself. These often are painful and could interfere with day to day activities. Children may find it difficult to hold the pencil in such cases.
•    Warts arising on the feet (plantar warts) do not get elevated but get compressed by the weight of the body. Thus it forms a compressed mass which looks like a corn (see box) with a dirty surface. Warts located on the heel and along the ball of the great toe cause intense pain interfering with walking or sports activities.
•    Warts can also occur on the genital areas. Being transmissible, they can spread to the partner through sexually intercourse. Depending on the location on the inner or outer areas of the vagina or penis, the appearance will vary. They may look like the common wart and appear as dry bumps or may be soft and fleshy, cauliflower-like masses projecting well above the surface. When it occurs in women during late stages of pregnancy they may grow into huge masses, unknown to the women as it causes no symptoms. In some cases it blocks the vaginal outlet and could interfere with delivery, necessitating Caesarean section.
•    In extremely rare situations, some types of HPV causing genital warts have been implicated to cause cancer of the cervix (the lower part of the uterus).
Differentiating warts from moles & tags
A biopsy of the wart, although never recommended, will reveal characteristic changes suggesting a viral invasion.
Moles are elevated black or dark colored bumps which may appear at birth or later. They appear spontaneously without any injury and appear as smooth surfaced and rounded. They do not appear in groups and do not have the alterations in the cell structure, unlike warts.
Skin tags are soft, fleshy, skin colored masses which hang loosely from the skin surface. They are often found on the neck, under arms and other body folds. Usually they are seen in obese individuals who have a family history of such growths. Skin tags do not spread to other areas although new ones may appear spontaneously. On testing the tag, it shows all the features of normal skin unlike a viral wart.

Treatment
Although warts are generally harmless and could even disappear spontaneously when left alone, once they are noticed they need to be quickly removed as they are liable to spread and multiply. Being a colony of viruses any delay makes them spread to people who are in close contact.
Treatment of viral warts is a challenge as they sometimes tend to reappear at newer places. Even after all warts are treated one should be alert to the appearance of newer warts as there is no internal medications against HPV.
Local medications:
Local medications containing fluorouracil, imiquimod and cantharidin are applied to the wart to allow them to shrivel and fall off. Unfortunately these applications have to be repeated at intervals to ensure successful treatment.
Chemical treatment:
Application of a combination of acids (Salicylic acid-lactic acid in an alcoholic film) to the wart every night after soaking the wart helps to dry up the superficial layers. By gently scraping with a file and repeating this application over a couple of weeks the wart gets shed off. The process must be continued till the doctor confirms that the entire mass has come off.
These acids must be applied with caution to avoid spilling on to eyes and other sensitive areas. On the face, these acids are not usually recommended. It is best to ask your doctor to demonstrate the actual method of application so that no harm is caused to the surrounding skin.
Fleshy genital warts are treated with an alcoholic solution of podophyllum applied weekly. This is however not safe in pregnant women who then have to undergo surgery. These are usually applied by the doctor himself/herself.
In the past formaldehyde solutions were regularly applied after scraping the wart to help destroy the viral tissue.
Electrocautery/Laser
The wart is removed by burning it through CO2 laser or electrocautery after numbing it with local anesthetic agents. The entire mass of the wart thus gets expelled and the wound thus created heals over a few days with a neat scar.
Freezing
A cryotherapy tip freezes the wart through a flow of Nitrous oxide gas. Alternatively ‘liquid nitrogen’- tipped applicator is used to destroy the wart. Over the next few days a bubble develops at the spot which ruptures and heals with normal skin. In some locations, the process needs to be repeated after a couple of weeks to clear the wart.
Surgical removal
In some cases the wart is too large to be treated by other methods and need to be operated and removed. When warts occur under the nail or close to the nail bed, surgery to remove the nail may be necessary before removing the wart.
Oral medications
There are no specific oral medicines to treat warts. However nutrititonal supplements are often given to boost immunity. Tablets containing zinc are given as they work as immuno-modulators and help the body to expel the wart virus.
Conclusion
Warts are thus one of the most harmless of viral infections but they need to be completely eradicated to prevent it becoming a social nuisance. Left alone, it is bound to multiply on the skin and become contagious to others who mingle together at home, school or at work. It is important to comply with the doctors instructions to keep treating it till the last wart is eradicated to avoid the risk of recurrence. When warts occur on the private parts of the body, one should not delay taking treatment as it can cause risk to one’s spouse as well.